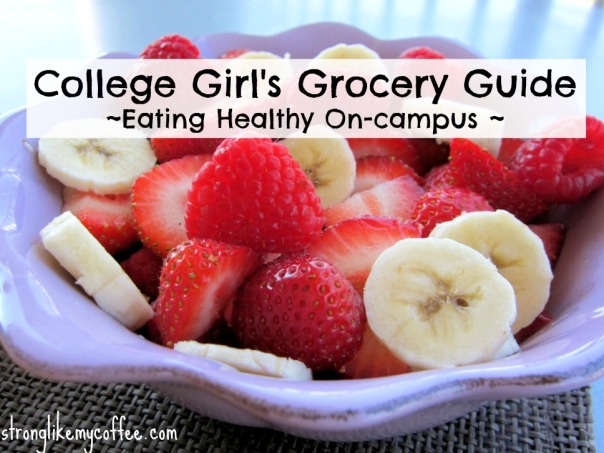 Are you a list-maker? I am most definitely a list-maker. I can’t even count the times my mom & I go to Target for 3 little items, come out with about 23…and forget something we came for in the first place. Which leads to a second trip to Target, where we buy more unneeded (but super cute!) things we don’t need. Lists save the day.

My list-making habit is only perpetuated by the post-it feature on my laptop. Those things come in handy! Currently I have a “Books to Buy” list with about 18 titles I can’t really justify buying until I finishing reading the last dozen I bought; a “To-do for School” list with boring tasks I’ve been putting off.  A list of the blogs I read daily, and another list of songs that I’ve heard on Pandora that I want to buy. And every Saturday morning I have a Grocery List, naturally. Though they pretty much always look the same. (I should just save them each week and re-use them. I’ve never thought of that until now…..light bulb moment here!)

Here are the staples of my grocery shopping that I regularly buy to keep my kitchen stocked with HEALTHFUL and energizing goods: 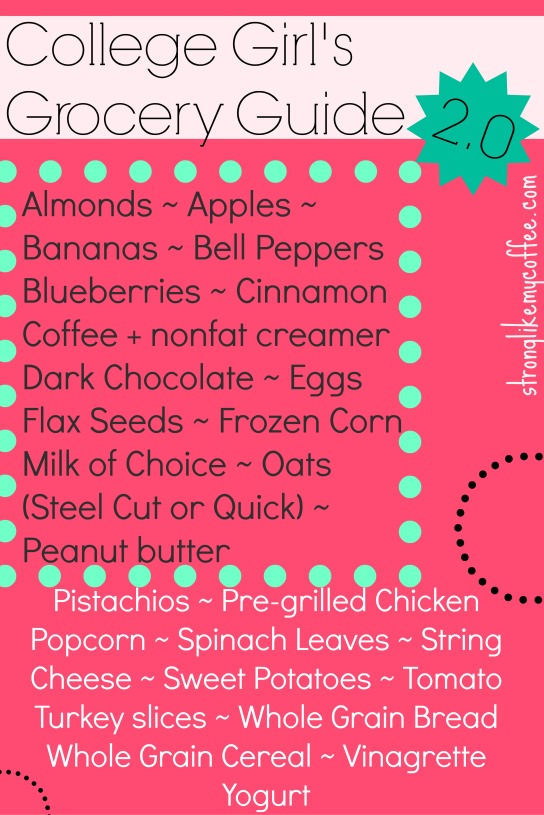 Last year I blogged about my Dorm Room Kitchen and Dorm Room Grocery Guide. I am no longer living in a shared-room….look who’s moving up in the world! ;) This year I will be moving into an apartment with three friends. We have a kitchen! No need for a meal plan anymore. My cooking options just expanded!

Campus dining seems to be heavy on the processed, sugary junk foods and light on the fresh healthy options. At my school, the cereal selection ranges from Lucky Charms to Fruit Loops to Coco Puffs. There are 5 times as many trays of desserts as their are baskets of fruit. It’s a diabetic nightmare. Eating every meal in the campus cafeteria/buffet is doable, and there are healthy options but I like knowing what’s going into my food. Plus cooking is just kind of fun :) 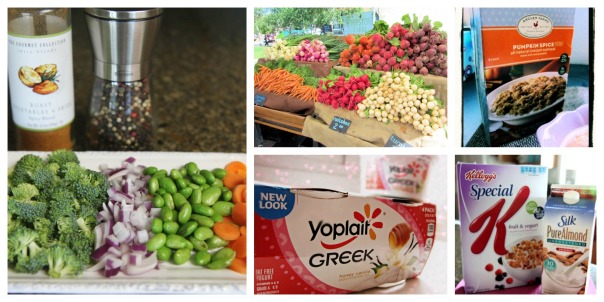 Along with these groceries, kitchen must-haves include a coffee pot (I mean…duh.), blender, steaming bags, and a toaster.

What’s in that lunch box? 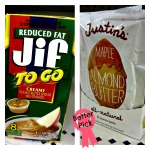 One year ago I launched stronglikemycoffee.com. It all began a few years prior, when I became addicted to reading blogs. Now I’m on the other end of the computer page…This occasion calls for coffee, and some (Low-Fat) berry chocolate chip coffee cake :) 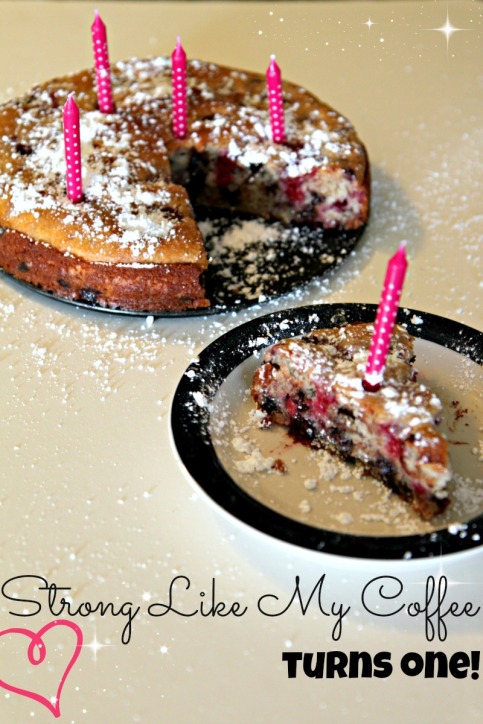 Reading other blogs has always provided me with so much inspiration. I enjoy reading all about other people’s lives….their food, their travel, their exercise, their ideas. Looking at their pictures and making their recipes and trying their workouts. After a while, it starts to feel like we’re friends…..when I don’t actually know them at all. (This is starting to sound stalker-y….it’s not like that, I promise!)

So 365 days ago I joined the club. I figured I had some similarities with bloggers I find so entertaining, I could join their little community and share my thoughts too. At first I began humbly….sharing my page with my friends and family. But then came some strangers. Thanks to (the genius) invention of Pinterest, strangers began stumbling upon and reading my blog. Most popularly, the simple post PACKING FOR DORM LIFE. That’s when I realized that there are plenty of college girls like myself from all over, who enjoy maintaining a healthy lifestyle just as much as I do. (BTW there will be a sequel to that post in the next few days…the new school year is right around the corner!)

I was hesistant at first…I didn’t want to publish too much about me, didn’t want people to see this site as a way to brag or beg for attention. I just want to share what I am truly passionate about with people who feel the same way! Reading other bloggers fitness stories, race recaps, goals or even recipes inspires me :) It reminds me to be thankful for the blessings in my life and appreciate the simple joys that we often overlook. I mainly blog for myself, a way to capture my journey.

But this coffee cake I made to SHARE. And I highly encourage you to make it too, because you probably have all the ingredients in your kitchen already and any “indulgence” in moderation is perfectly compatible with a healthy lifestyle :) 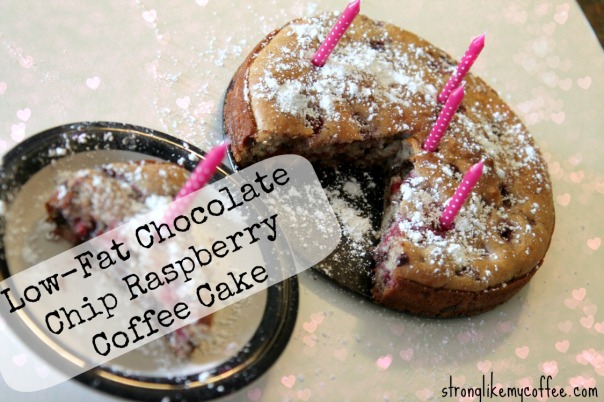 3. Add the dry mixture to the milk mixture; stir in raspberries & chocolate chips.

4. Pour evenly into a greased spring form pam; bake for 55 minutes at 350 degrees or until top is golden brown and the middle passes the toothpick test!

5. Let cool for 20 minutes before slicing and sharing with a freshly brewed pot of coffee. Cheers! 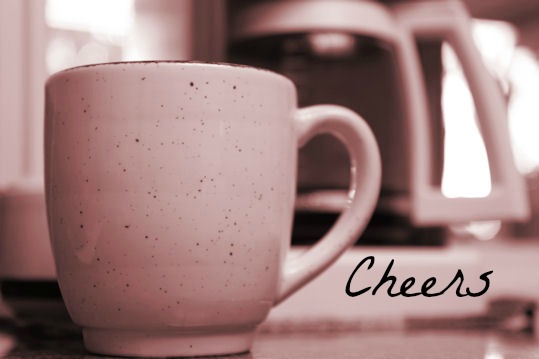 365 days. 166 blog posts. Even more planned for the future! I’m excited to see what the next year brings, for myself and for stronglikemycoffee.com. There’s my first collegiate cross country season, my first apartment, my first marathon, my 21st birthday/Vegas trip, my next set of surgeries, and at least 365 more cups of coffee. Everything else…we shall just wait & see!

Once we left Bozeman, MT we took the scenic route to Yellowstone National Park. I have never been to the park, didn’t even really know much about it so I was quite surprised and amazed to see that there were hundreds of miles within the park. Who knew?!

Part of the appeal of this summer vacation was a road trip with lots of scenic sights and hiking some trails. I’m sad to say that today I learned that I like the idea of hiking more than actual leave-civilization-and-walk-among-the-wild-creatures hiking. The “Caution: Wildlife is Dangerous” signs didn’t scare me. Seeing this entire herd of buffalo next to the two-lane highway didn’t scare me. But walking along the boardwalk to view the Mud Volcano and happening upon two wild Bison had me panicked and squeezing my mom’s shoulder, begging to get out. That’s the moment when I realized I was way closer to nature than I wanted to be. 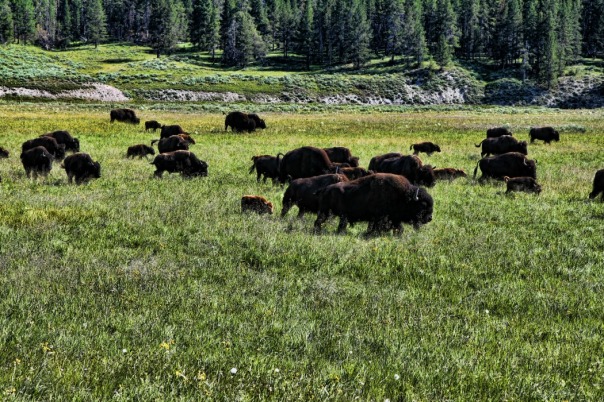 The first night in Yellowstone I asked the ranger in the visitor’s center for recommendations of running trails. So many things wrong with her answer; she said I shouldn’t run. That if I did encounter a bear, my running would trigger their predator instinct and I would become their “prey.” She also said that I should never run on trails, but that running on the road is dangerous too because the road is narrow and people suck at driving. Oh and don’t run with an ipod. Don’t run by yourself. Don’t run early in the morning. Basically: there is no safe way to get in your run. BUZZ KILL.

We were on the half-mile loop that encompassed Mud Volcano, Dragon’s Mouth and some other mud pots when we saw a lone Bison in the center of the loop. The boardwalk did not have hand rails separating the humans from the animals, and he was getting awfully close to the walkway. At one point, it looked like he was going to walk along with boardwalk with us. I was a little leary of being so close to something so wild, but the full on panic didn’t set in yet. That wasn’t until we saw the second bull, a few yards away sitting idly. Until he wasn’t sitting anymore. He stood up and made a huge cloud of dust as he pawed at the ground, then faced the first bison. The first bison started walking towards him, grunting, a woman in front of him. All I was thinking was “Oh snap, they are going to fight and I’m glad I’m not that poor woman sandwiched between them.” 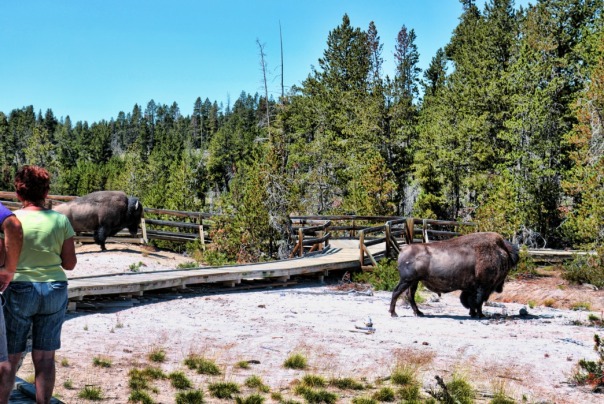 A few moments before they faced each other….by then I was a little too preoccupied trying to SAVE MY LIFE to snap pictures (melodramatic much…?) ;)

I watch Planet Earth; I see what those things do for survival. Mad dash to the car, please!

My goals for the day went from “Get in a 10-mile run” to “Run a few miles but get in at least 10 miles of hiking” all the way to “Get me out of here alive.” Dramatic? Probably. But seeing a 2,000-pound animal literally ten feet away and coming closer, making suspicious grunting sounds and kicking up dust with its legs doesn’t exactly scream “take pictures of me, I won’t bite.” I wanted out of there and quickly nixed the 6-mile hike we had next on the agenda. I wish I was a little more fearless but I can’t help the fact that the possibility of getting closer to a wild animal than a zoo exhibit sends my heart into a panic. I got my cardio exercise today from bison sighting’s alone! 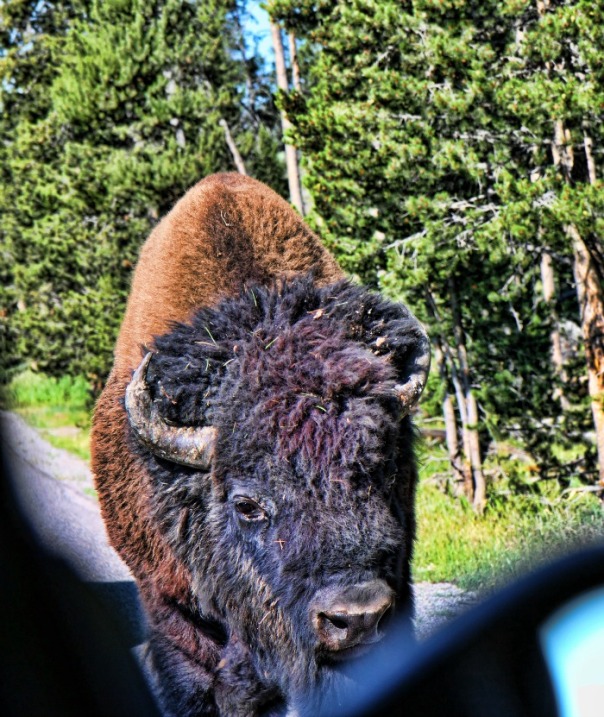 This ain’t no petting zoo.

Hiking along the coast line in Southern California is a tad different than in the pre-historic lands of Yellowstone.

I was hoping to see a Moose though. I’m sure they’re no less dangerous than a herd of buffalo but a moose just looks so chill, like “Let’s just hang out and watch the river flow, guys.”  Whereas a buffalo says “Mess with me and I’ll head-butt you into a coma.”

The way people would pull off to the side of the road, get out of their cars and start approaching the animals for photos reminded me of Jurassic Park. We just needed some super cool Jeeps to tour around in. When two bison crossed the street in front of us, cars backed up for a mile. My dad goes, “Welcome to Nature. It’s a traffic jam.” 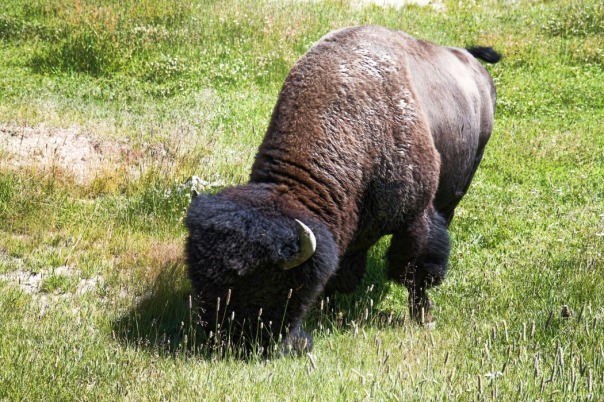 The lodge we stayed in was super cozy, back to the good ole’ days of no TV, internet, microwaves & cell phone service. We actually played cards, read, drank instant coffee…. and watched movies on our laptops ;) Can’t stay completely out of this century.  Yellowstone is a place that everyone should get to see, to appreciate the beauty. Nature can do some freaky stuff! But next vacation I would like to do something a little less rustic and woodsy. Preferably somewhere I can run without seeing Warning/Danger/Caution signs along my route ;)

If you think my fear is exaggerated and bison look as casual as cattle, just Youtube “Bison attack at Yellowstone”! Probably not the night before entering the park though…