That time I randomly won a Warrior Dash entry…

Good morning friends! So this is the end of spring break….10 wonderfully carefree days where I did less blogging/homework/social media and spent much more time outdoors. No appointments or schedules….except one little thing that recently popped up on my calendar…

I told you I read tons of other blogs, including fellow marathoners. The week before spring break, Run Eat Repeat hosted a giveaway on her blog for two entries for the Warrior Dash 2015. It’s a big muddy obstacle course, kind of like the challenges on Survivor! Guess who won one? ;)

Southern California was between 70-90 degrees all week so I ended up staying for 9 days. Saturday was the race day, and I opted to stay through Sunday morning to do my long run at sea-level.

The atmosphere at the race was awesome! People always come in cute or crazy outfits for these big events, so there were lots of tie-dyes and tutu’s. The Warrior Nation Stage was huge with live music, Shock Top had a full bar (free beer for racers which I gladly donated haha), Rockin’ Refuel was giving out all their chocolate milk. There was a giant rock wall and other vendors, and we even played some corn hole while waiting for my start wave.

I was first on the start line, and we were sent off with two fiery blasts.

Only thing I would do differently is wear sunscreen. I didn’t know what the course was like (noooo shade) and I’m sporting a nice red nose to school today. Spring break souvenir? The path winded around some trails for about a mile before we hit the first obstacle, which was crawling under several barbed wire lines. Next we went through some trenches, climbed wooden ladders, traversed beams, scrambled over nets, pulled ourselves up with ropes, sludged through mud, crossed a stream, and slid down the utlimate muddy water slide.

My favorite obstacle was called High Tension: you balance and walk across a rope while holding onto another rope above your head while water rains down. So much going on! And the GRAND FINALE of it all:

Can we take a moment to notice the girl on the far left taking a selfie? Hope she has a LifeProof! 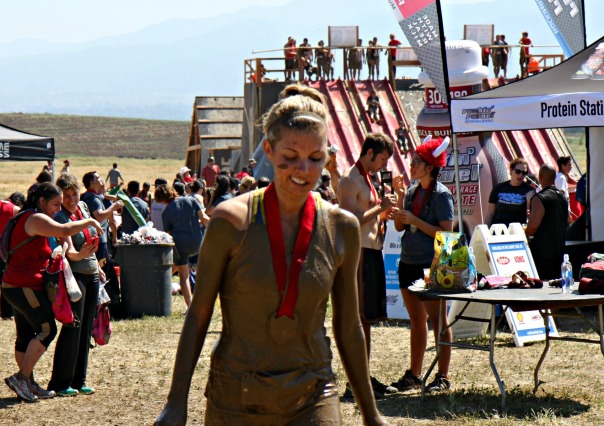 My expression doesn’t quite capture my thoughts at that moment, which were “Point me to the showers!” I knew it would be muddy, but wasn’t expected to fully submerge in the pit. Pretty sure I had some mud in my mouth and a nest in my hair. That outfit is now in the trash and after two long showers, I finally feel clean again!

I had fun doing this unexpected last-minute race, though I think from now on I’ll stick to mud-less marathons :)