Good late morning again :) This work week is flying by thanks to a the three-day weekend!

Last night I got to play with my newest toy….the FitBit Surge! This “fitness super watch” is one of the highest-rated fitness trackers on the market right now and I was so excited to upgrade from my 5-year old Garmin (which we call a computer on my wrist…it’s massive!). The Garmin has been an awesome running watch, but it doesn’t have the newer technology like a heart-rate monitor, sleep monitor, and Bluetooth connectivity for notifications and music control.

All day at work I looked forward to my evening run, a break from the gym and the treadmill for a trail run with my new watch/running buddy. We name all of our GPS gadgets that talk to us (my car’s GPS is Reggie) so I went with a coach theme and named the FitBit Eric (Friday Night Lights reference, anyone?!!) I was excited to play with my new toy and see what my heart rate is like on a steady state run, during the Alexa Jean Fitness Sore to the Core routine, and then this morning during a HIIT workout. 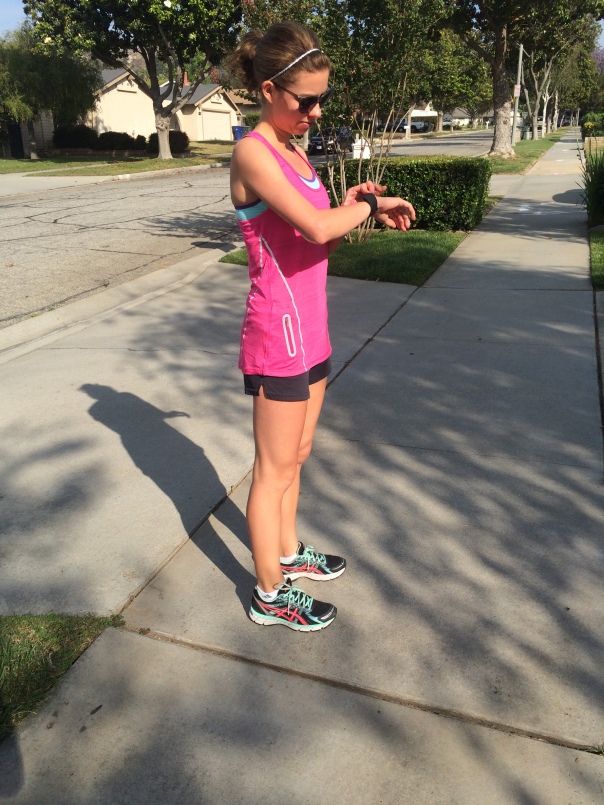 I thought I’d share a little intro on the watch since it will be permanently attached to my wrist for the next few weeks while I learn about my daily activity level! (And yes, my hair is darker.)

The Fitbit Surge is a touchscreen (waterproof, thank goodness. This girl sweats!) The all-day stats include:

You can also set silent vibrating alarms and daily goals. You can track seven other exercise activities including hiking, biking, yoga and HIIT.

The sleep analysis intrigued me. Apparently the technology in the watch is sophisticated enough to recognize when the user is awake, restless, and asleep. In the morning, your FitBit dashboard will bring you information about the length and quality of your sleep. I’ve never slept in a watch before but I will for the next week just to see what it says.

The “flare style” clock is so fun! My Garmin was not a daily watch; I would never wear the Garmin watch when I was not running. The FitBit Surge is meant to be an all-day fitness tracker with relevant information beyond running so of course it includes an actual clock face. The “flare” style surrounds the digital time with a “wheel-and-spoke.” Each spoke represents a minute of the current hour (60 spokes) and the length of the spoke is determined by your activity level during that minute. Sleeping hours will have one dot for the spoke. An hour running will extend the spoke to the edge of the face. Average activity will end up somewhere in between. By the end of the hour, your clock will have a graphical illustration of your activity trends. I think that’s pretty cool!

It will be really exciting to watch the data grow over time. I like making charts and lists and watching trends over time (market research classes will do that to ya!) especially when the information has to do with me and running. ;) You know me, always room for improvement!

Tonight I’m going to test out it’s “treadmill” feature…apparently it can track stationary runs as well. I’ll also like having my heart rate information (last night it hovered around 150bpm for my 8-mile run and around 45bpm for my resting heart rate). But I promise I won’t bombard with any more tech-y posts in the near future. ;)

Half way to the weekend!