My internship with the PGA golf tournament is coming to an end. It has been a steady week of incredible crowds, inclement weather, and hours of people-watching in the herds of over 100,000 spectators in Phoenix, Arizona on this Super Bowl weekend. Let me just say that crowds of people can be highly entertaining. Add in some alcohol (and in this particular scenario, drinks started flowing before 10:00am) and you’ve got a real show on your hands. 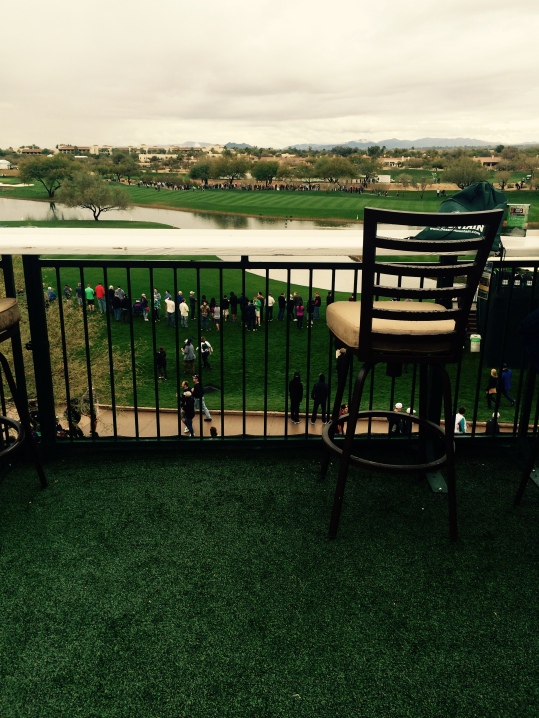 The majority of each day, I stood at the entrance and bar of the sky boxes for Hole 16, notoriously the most rowdy and wild hole on the PGA tour. For example, Francesco Molinari shot a Hole-in-One on 16 this morning and the stadium showered the stands with beer. So needless to say, there was plenty of opportunity to simply people-watch.

Each day for employees begins in the special parking lot reserved for all staff, including waitresses, bartenders, cooks, cleaning crew members, security guards and other interns. Lines and shuttle rides from the employee parking lot are entertaining enough. I get to hear about the bartenders’ (100% female staff) strategies for pulling the most tips out of their customers. I learned that at the Kid Rock concert last night, his security guard used a false ‘porta-potty’ as a secret door to the rocker and band’s staging area. Our bus driver became suspicious when she saw a bouncer standing outside the potty, and multiple people entering without coming out. Pretty clever disguise for a secret entrance, albeit a smelly one.

I was shocked to learn that the bartenders and waitresses at this event worked strictly off of tips (although, in a $50,000 sky box I’m sure tips will out-haul minumum wage ten-fold) and many of them went straight to their regular jobs downtown after working 9 hours at the golf course. Rockstars and Monsters were the drink of choice; I saw more morning energy drinks than coffee. 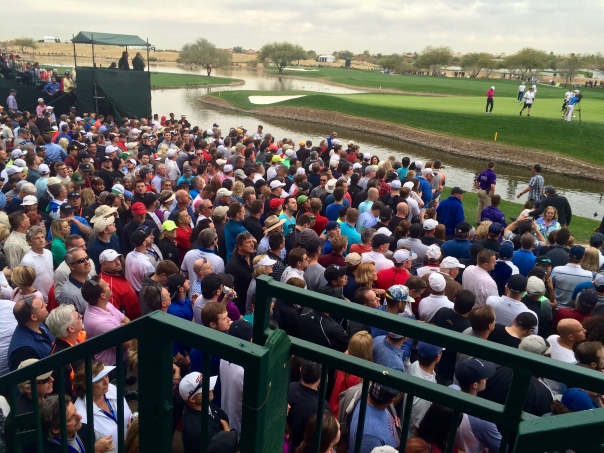 People will lie and embellish the silliest stories to try to get into the sky boxes. The things they come up with for a free beer! Some were not so creative (“my friend has my ticket and he can’t come down”) and some were a little far-fetched (“I’m Tiger Wood’s daughter”). Some were very rude (“I’m a senior citizen, I can’t believe you won’t let me in. You are ruining the sport of golf”) and some were desperate (“How much money can I give you to let me up there”). One guy tried to show us a picture of his pass, then took a used pass from another guest, then tried to follow a crowd in. His lime green pants didn’t help him blend in.

Part of the fun of people-watching is the variety of outfits people wear. For men, it’s a pretty standard button-up or t-shirt with jeans and dress shoes. Not too notable. The women though were all over the board with their styles, from Conservative-businesswoman to die-hard-sports-fan, from workout-chic to straight-out-of-Wal-Mart. Some wore adorable rompers and I complimented their classy ensembles. Some wore stilettos and too-skinny jeans and I feared for their ankles in the muddy and wet conditions. Everyone has their own style, and their own comfort level. I really don’t judge anyone for what they wear, but I do find it very entertaining and I found myself playing ‘Who Wore It Better’ in my head all day.

Along with spectators, I really got to know some fellow employees that also worked at the entrance of Hole 16. Two retired men, John and Dave, greeted guests and scanned their credentials. They certainly had the personality for it. Although John is a soon-to-be grandfather, he was quite the flirt with the ladies and Dave had something kind or funny to say to nearly everyone who walked up. Throughout our days together, I learned that the pair had been friends for years. They were self-proclaimed ‘gym rats’ who had a strict 8am gym routine 6 days a week. In fact, they are so dedicated and so social at the gym that they each received worried text messages while we were working at the golf course from fellow gym-goers who were concerned that neither of them had shown up to the gym for a couple of days. So sweet :) Turns out that Dave was married to another hole-16 greeter, Jenn. They were a retired police officer and a retired fire chief who met in a traffic accident.

It’s now the last day of the tournament and I’m sure the Super Bowl in the same city will attract some of our massive crowds. Have a happy Super Bowl Sunday! Go (Insert your favorite team here)! ;)