← The Skinny on Cocktails + Recipe
Fresh 4th of July Dessert! →

When I say “running on coffee” I mean it in the most LITERAL sense.

Within 30 minutes of waking, I drink half a cup of coffee and hop on the treadmill for an early morning run.

Because there is a name for everything in the fitness world, this is called “Fasted Cardio.” A few times a week, I run 5 miles (with the incline set to .5%) before driving home, taking a shower, and eating my first snack of the day. 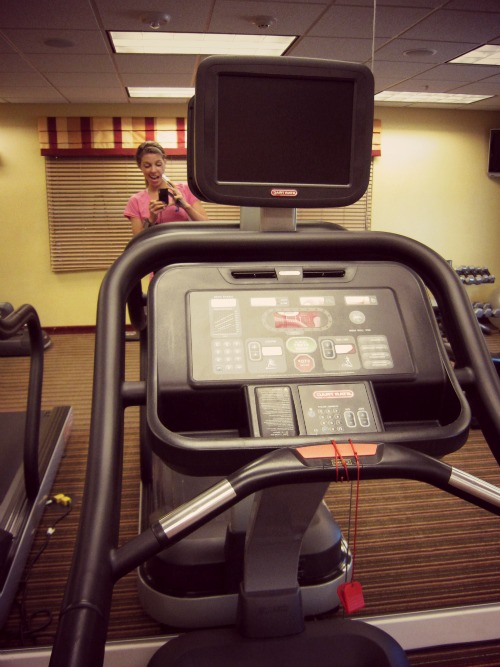 “Fasted cardio” is exactly what it’s name implies…completing a workout before eating anything after waking up in the morning. Many fitness freaks report that this strategy increases fat burn because there are no immediate glycogen stores to pull energy from.

*Note: calorie burn remains the same; where the calories are sourced from is the idea in question.
Personally, “fat burn” isn’t my mission when I tackle a treadmill sesh before breakfast. I’m just not ready to ingest anything at dark:thirty in the morning. I mean I like my oatmeal, but not at 4:30am.

The truth behind the myth of increased fat burn with fasted cardio is still highly debatable. Many sources support the ability to tap into fat stores quicker. Others say it makes no difference in the big picture. Web search “Fasted Cardio” and the first result argues for the miraculous effect while the second result claims it has no positive enhancements.

I can’t say which is better, to eat or not to eat before morning cardio sessions. Fasting for 45 minute runs works for me! I wouldn’t dare attempt a long run with a small snack though. Which works for you?

← The Skinny on Cocktails + Recipe
Fresh 4th of July Dessert! →